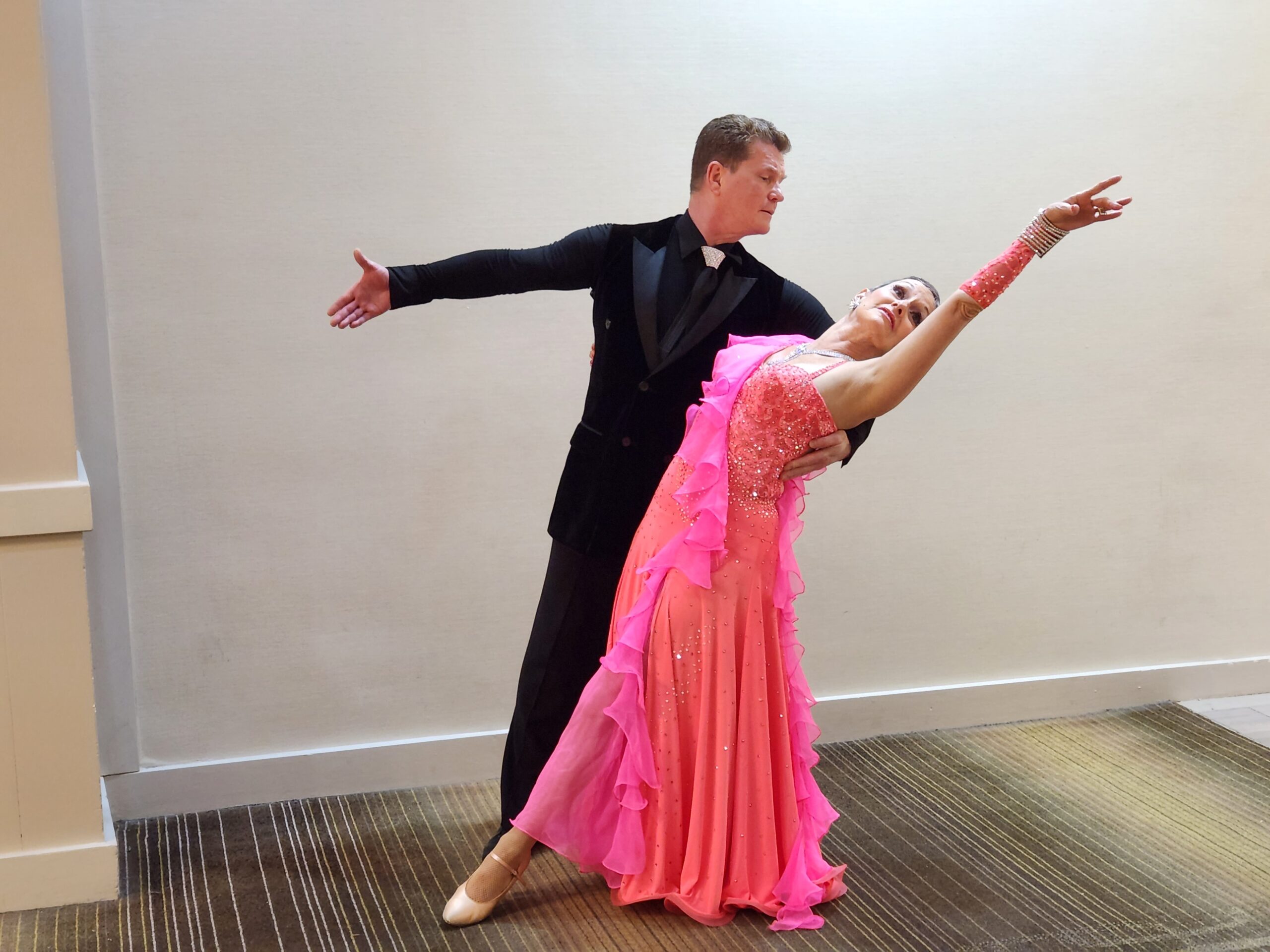 To someone looking in, it may seem like an easy task to find a competitive dance partner; however, that could not be further from the truth. Finding a dance partner is harder than finding a spouse. Fortunately, Emilie and Val came from an amateur competitive dance background and knew what it would take to compete professionally. Like salt and pepper, they were the perfect match.

In 2001 as they were traveling to Atlanta for the Atlanta Open, they began to map out their strategy to begin competing professionally.  Their goal at first was to just compete in smooth. They began practicing daily, putting in 16-hour days, with three-hour practices, long drives, and full workdays. Since Val was living in Columbia at the time, Emilie had to drive to Columbia on the days that Val was not at The Ballroom Dance Center. On one of her many drives between Augusta and Columbia, she pulled in at a truck stop on her way home dressed in her practice clothes to get a much-needed cup of coffee. As she was standing there, a trucker asked her what kind of rig she was driving. Her immediate response, “I am not a trucker. I am a fairy princess.” You do not want to mess with a fairy princess who needs her coffee.

Over the years Emilie and Val have grown in their understanding of dance and each other. They have also learned each other’s strengths and weaknesses and can avoid confrontational situations. Flexibility helps a great deal, and through it all, they have become best friends.

Val’s science background has helped tremendously in the physics and mechanics of dance. Take pivots for example. They are a beast! There is so much that goes into executing each movement you make when dancing. It is not about the feet. They are a part of it, of course, but there is so much more to it than moving your feet. Your body must tell your feet where to go, and Val excels in breaking down movement mechanics. Emilie’s theatrical background, artistic flair, and vivid imagination complement him. She conceives of and writes the original scripts for our Broadway-style shows, developing characters that weave together the story using smooth and rhythm dances.

After working on their Smooth dances for a year, they decided to add Rhythm, since they really enjoyed competing. So, they became 9-Dance competitors in the American style of dance. When you are a 9-Dance competitor, you dance the Smooth dances of Waltz, Foxtrot, Tango, and Viennese Waltz as well as the Rhythm dances of Cha-Cha, Rumba, East Coast Swing, Bolero, and Mambo. This meant double coaching, double costumes, double practice and double the costs. It was practice, practice, practice in addition to keeping their teaching schedules. They also traveled a great deal, going to competitions at least once a month. They competed primarily on the East Coast, but also on the West Coast and in other areas of the country.

Students, Ron and Nobue Young, were right there with them cheering them on and competing at the various competitions. Everyone in the competitive world knew Ron and Nobue. While Ron is no longer with us, Nobue still enjoys competing. At 90, you will find her at the studio taking lessons twice a week.

When Emilie and Val were dancing competitively, you either did the 9-Dance American style or the 10-Dance International style. It made competitors more well-rounded dancers. However, today most dancers focus on either Smooth or Rhythm. The competitors pick the one they are better at.

This was such a fulfilling time in their professional career. Not only did they learn from coaches like David Hamilton, Donald Johnson, Eddie Ares, and Marina Vlasova, but they developed an incredible network of fellow competitors in the ballroom dance world. It really is true that you meet the nicest people when you dance ballroom. There is an incredible comradery with other professional couples when you are on the road. They understand all too well the life you are living. You may be in a hotel from dawn to late at night, but you are with friends.

An incredible friendship with Deirdre (Baker) Starkey Frey began while Emilie and Val were competing. Prior to their first competition, Emilie had gone to a local dressmaker to have a professional competition dress made. It just did not work.  In fact, it was a lavender disaster! Designing dance dresses is very specialized, and a small group of top-notch designers make the stunning dresses you see in competition. She ended up buying a beautiful dress from a fellow competitor, and not too long after that, she and Val met Deidre who became a dear friend and sponsor.

Deirdre made her way to the United States from Australia where she was a competitive dance champion with her husband Ray Baker. She and Ray moved to London, and they traveled internationally to compete. She established Deidre of London while there. As a designer, she saw a move to the United States as a wonderful opportunity and then based her international business in Florida. Through her connections in England, she was able to get smooth suits for Val and eventually became Emilie and Val’s sponsors with Emilie wearing Deidre’s designs exclusively. As wonderful as it was having access to Deidre’s beautiful designs, the friendship that developed has lasted over the years. During the height of their competitive years, Deirdre made dresses for students of The Ballroom Dance Center who competed as well. She continues to design and make dresses for many of our competitive students. No other dress gives you quite the feel as a dress made by Deidre.

A key to excelling among other competitors is being seen by the judges. There may be six or more other competitive couples on the floor, and you may only have a second to catch the judges’ attention. If you cannot do it in that moment, you may be written off for the rest of the competition. It does not seem fair, but with so many couples to watch, that is just how it is. Showmanship and quality of dancing that is consistent are rewarded.

A valuable lesson learned along the way is not to eat a bag of jellybeans before you compete. It may just lead to a sugar crash while you are on the dance floor. A big meal is a no, no as well. A much better choice for competitors is a protein bar and a cup of coffee.

After seven years, Emilie and Val decided to step away from competing as a professional couple in the 9-Dance American style division where they were United States fourth place finalists. They now wanted to focus on pro/am competitions with their students and developing shows at the studio. So, the next chapter begins in “Our Story.”